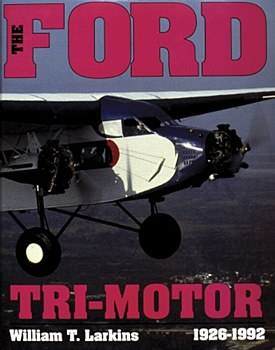 012552
"Ford TriMotor 1926-1992"
A large number of people in the United States had their first airplane ride in a Ford Tri-Motor during the 1920s and 1930s, a plane that remains to this day a fine example of engineering, planning and production. It was the application of a modified assembly line production by the world’s largest automobile manufacturer to a continuously refined design, backed by extensive advertising and publicity concerned with safety, at a time when such dependability and safety was crucial, that put Ford ahead of all of its competitors. The all-metal construction, stressed so much by the Ford advertising campaign of the late 1920s, proved its worth in later years. This is the most complete information available on the Ford Tri-Motro, and includes information on design, construction, model designations, a cross-indexing of U.S. and foreign registrations, a cross-index to military Ford Tri-Motors, Ford factory employees and Ford Tri-Motor pilot listing.
Hardcover 320 pp