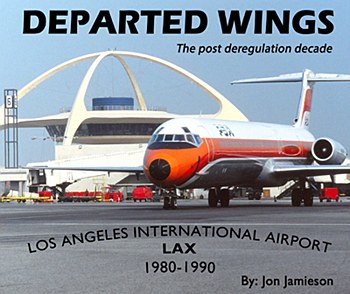 012544
It has been 40 years since the Airline Deregulation Act was signed into law in October 1978, and the far reaching effects of the act continue to be felt today. Intended to remove strict oversight by the government on airline routes, fares and services, the Airline Deregulation Act fostered competition, development of a hub-and-spoke system, as well as entry of new airlines in this "free" market. The decade following the Airline Deregulation Act saw several airlines both large and small start operations hoping to establish business in a specific niche market.
In the first of a series of books, Departed Wings-Los Angeles LAX, is a visual tribute to the post deregulation decade at one of the most famous airports in the world. Los Angeles was host to numerous start-up airlines as the result of deregulation, as well as a strong-hold to major domestic carriers and international airlines that placed LAX on their route maps. With 90 spectacular photographs and detailed, descriptive captions explaining the history of the various airlines and aircraft that transited LAX during the years 1980-1990, Departed Wings-Los Angeles LAX is sure to rekindle memories of one of the most exciting eras in commercial aviation.
Hardcover 96 pp